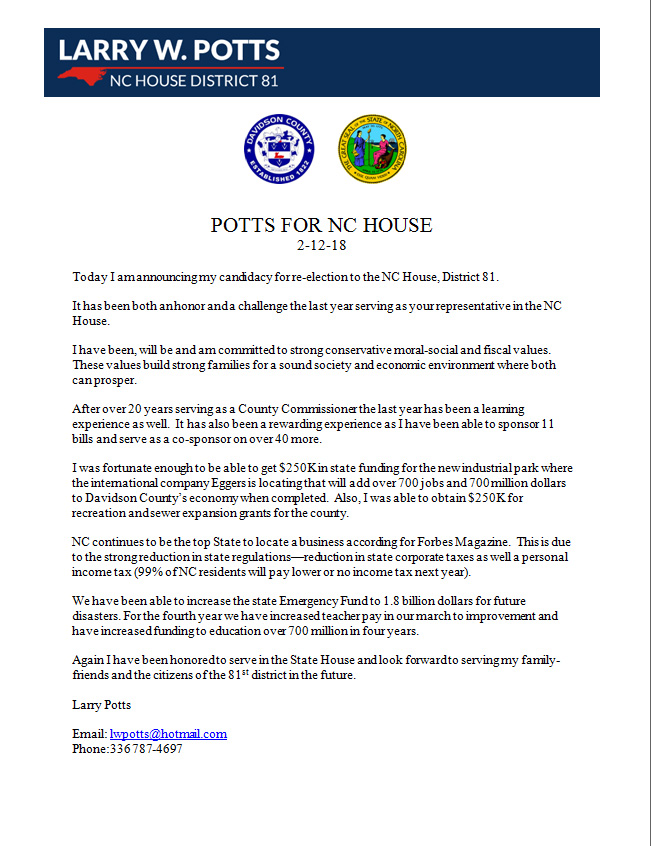 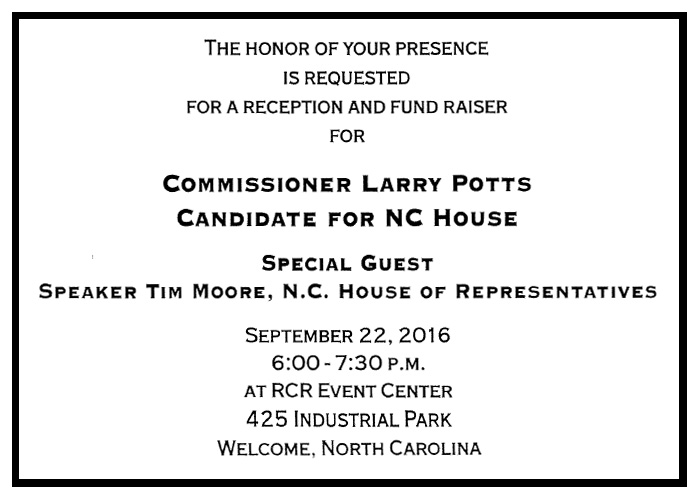 As previously announced I am filing for the NC House of Representatives house district 81. I have been both extremely humbled and honored to serve 5 terms as Davidson County Commissioner including 9 times as Chairman and 4 terms as Vice Chairman.

The Boards on which I have served have maintained a conservative fiscal philosophy while looking to the future by keeping pace with the growing needs of our population thru school construction, law enforcement facilities and EMS bases to respond to the needs of an increasing elderly population.

We have weathered the Great Recession and have replaced over 10,000 jobs that were lost due to closing facilities or placing local jobs off shore.

This has been accomplished thru sound management decisions and leadership experience while maintaining a 54 cent tax rate—by far the lowest of any county in our population group.

As you are aware by my 20 years of voting I am a moral and social conservative as well as a fiscal conservative and it is my intent if elected to represent Davidson County by continuing those values in Raleigh.

As a self-employed businessman for over 40 years I have seen the effects of years of government taxes, intrusion, regulation and bureaucracy has had on American business and industry and will work to reduce that burden in Raleigh

For the past eight years on the National level America has experienced first hand with dramatic effects the fallacy that experience of leadership doesn’t matter. The difficult times of the present require tested leadership.

Finally, the reason I am running for the NC General Assembly is the same one as when I volunteered for the military in and during the Vietnam Era and the same one that motivated me to seek the office of county commissioner 20 years ago… “to make the county, state and nation I love a better place for future generations.”

“It has been a real pleasure to work with Commissioner Larry Potts, I will truly miss his wisdom and common sense approach to county government. I fully support his candidacy for House District 81, Mr. Potts has demonstrated the ability to always put politics aside and do the right thing for the citizens of Davidson County."